The legal speed limit in streets across much of Edinburgh’s city centre and rural west area has been decreased to 20mph. The roads round Murrayburn Primary went live at the end of February 2017.

The new speed limits are designed to increase safety for all road users in Edinburgh as well as creating a calmer, more people-friendly environment in shopping and residential streets.  A network of key arterial roads across the city will be retained at 30mph and 40mph, resulting in a modest impact on journey times overall.

The phased 20mph ending early 2018 brings to fruition many years of planning and public consultation and the network has been designed in line with robust criteria in partnership with key stakeholders such as Police Scotland and Lothian Buses.

Police Scotland will enforce the new limit, focusing on areas where particularly high levels of contraventions are recorded. Anyone caught breaching the limit risks a £100 fixed penalty and three penalty points on their licence.

The City Of Edinburgh Council have long recognised that a majority of city residents want to see speed limits reduced in the city centre, around residential areas and in busy shopping streets.

Further information and a detailed map of the 20mph network is available at www.edinburgh.gov.uk/20mph or visit our Facebook page at www.facebook.com/edin20mph. 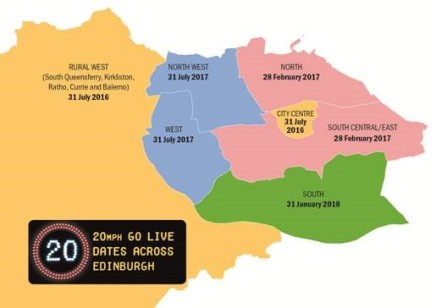